List members , prepare to be shocked - A Solar System with 6 stars has been discovered !! Now , how strange is that ?? Now wait a minute - had Newton and Kepler and Einstein not taught us that only 1 star , at most 2 can co-exist in a solar system , which they believed is governed by gravity ? What will their followers now say :)) 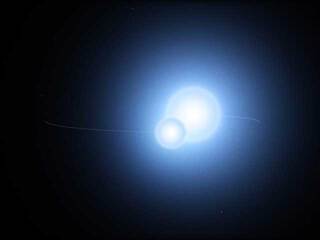 Astronomers found the first six-star system where all of the stars participate in eclipses, a discovery made by NASA’s Transiting Exoplanet Survey Satellite (TESS). The system is about 1,900 light-years away in the constellation Eridanus. 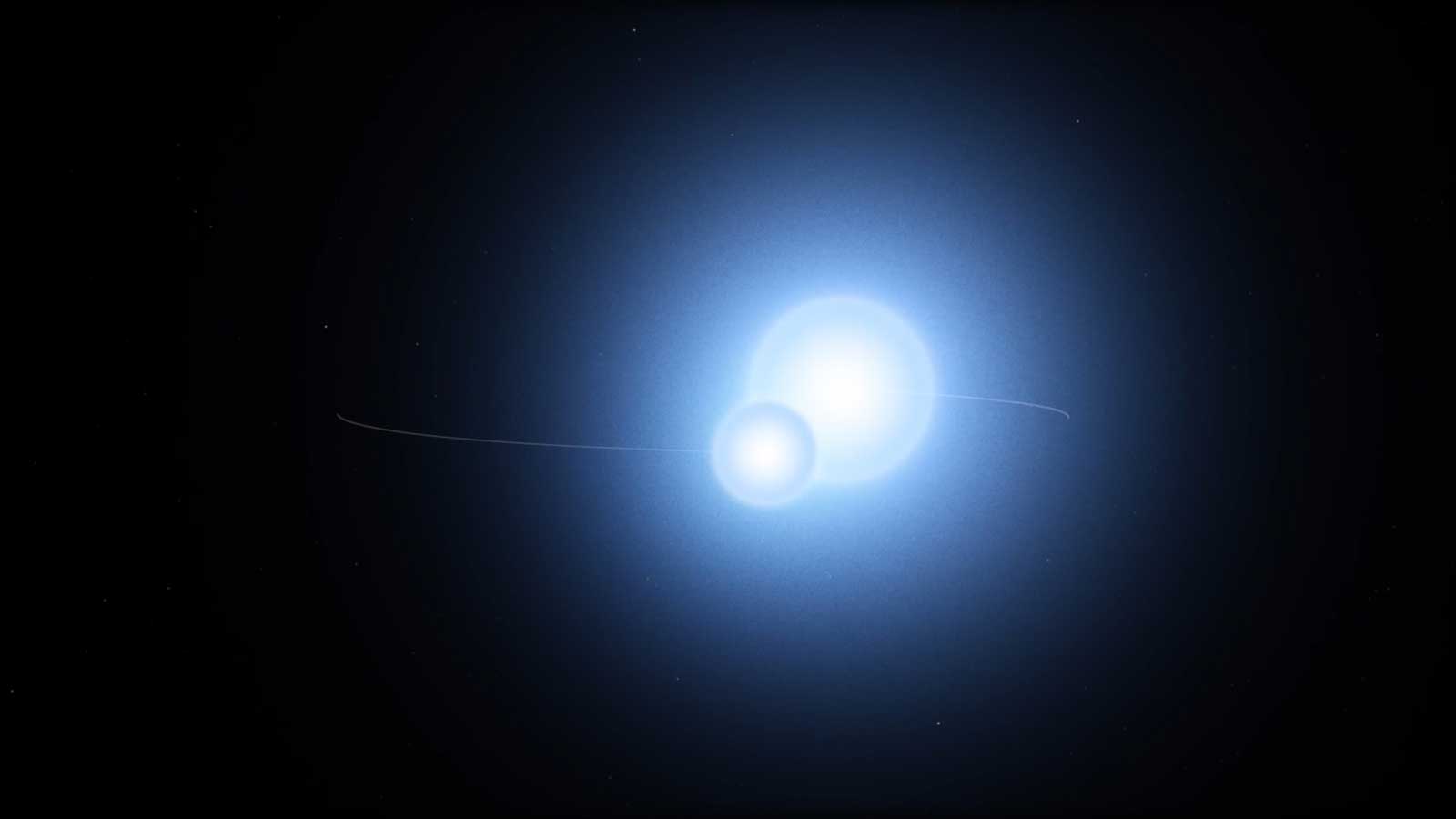 The discovery: TYC 7037-89-1 is the first six-star system ever found where all of the stars participate in eclipses, a discovery made by NASA’s Transiting Exoplanet Survey Satellite (TESS). The system is located about 1,900 light-years away in the constellation Eridanus.

Key facts: The system, also called TIC 168789840, is the first known sextuple composed of three sets of eclipsing binaries, stellar pairs whose orbits tip into our line of sight so we observe the stars alternatively passing in front of each other. Each eclipse causes a dip in the system’s overall brightness. Astronomers designate the binaries by the letters A, B, and C. The stars in the A and C systems orbit each other roughly every day and a half, and the two binaries orbit each other about every four years. The B binary’s members circle each other about every eight days, but the pair is much farther away, orbiting around the inner systems roughly every 2,000 years. The primary stars in all three binaries are all slightly bigger and more massive than the Sun and about as hot. The secondaries are all around half the Sun’s size and a third as hot. 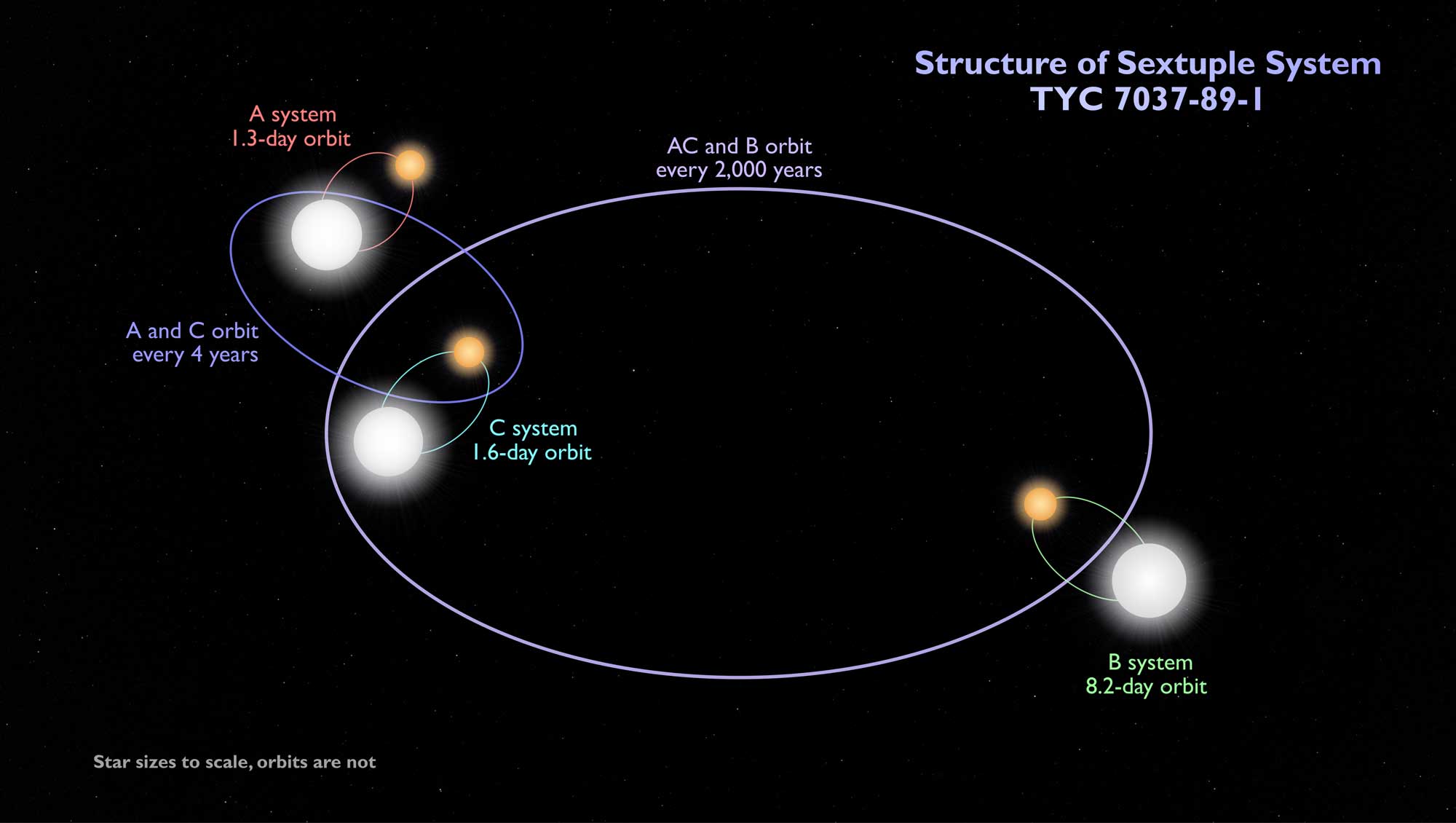 This schematic shows the configuration of the sextuple star system TYC 7037-89-1. The inner quadruple is composed of two binaries, A and C, which orbit each other every four years or so. An outer binary, B, orbits the quadruple roughly every 2,000 years. All three pairs are eclipsing binaries. The orbits shown are not to scale. Credit: NASA's Goddard Space Flight Center

Details: Scientists used the NASA Center for Climate Simulation’s Discover supercomputer at NASA’s Goddard Space Flight Center to chart how the brightness of around 80 million stars observed by TESS changed over time. They then analyzed the data using autonomous software trained to recognize the tell-tale brightness dips of eclipsing binaries. Among the 450,000 candidates, researchers identified at least 100 with potentially three or more stars, including the new sextuple system.

Fun facts: Astrophysicists are very interested in eclipsing binaries because their structure aids detailed measurements of the stars’ sizes, masses, temperatures, and separation as well as the distance to the system. They can use this information to build better models of star formation and evolution. For example, in the case of TYC 7037-89-1, scientists want to learn more about how the primary and secondary stars across the three binaries developed such similar properties and how the three systems became gravitationally bound.

The discoverers: An international team, led by data scientist Brian P. Powell and astrophysicist Veselin Kostov at Goddard, made the discovery using TESS data. The researchers incorporated archival measurements and also obtained follow-up observations with ground-based facilities. The core team includes Saul Rappaport at MIT, Tamás Borkovits at the University of Szeged in Hungary, Petr Zasche at Charles University in the Czech Republic, and Andrei Tokovinin at NSF’s NOIRLab.

The paper, "TIC 168789840: A Sextuply-Eclipsing Sextuple Star System," has been accepted by The Astronomical Journal. A pre-print version is available online.

Folks , our Universe keeps getting weirder - another Solar System has now been discovered , wherein 3 stars share one planet !!

Hadn't Newton , Kepler and Einstein taught us that Solar Systems are governed solely by gravity and always have more planets than stars ??

It so happens that Electric Universe theory posits the existence of such weird Solar Systems :))