CNSA Releases Video of Mars Landing (The Sky is Blue) 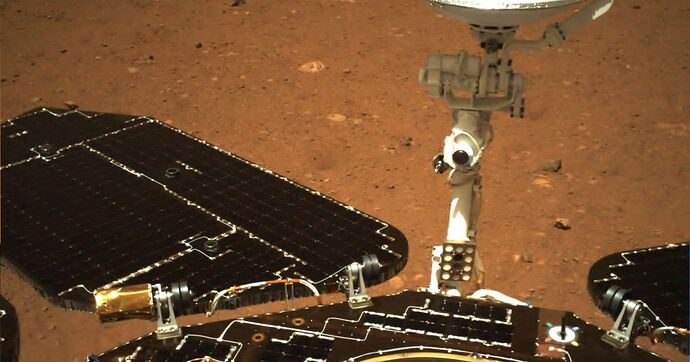 China's Zhurong Mars rover sends back its striking first images of the red...

The latest Mars robot got a good look at the dusty and rocky landscape at its landing site. 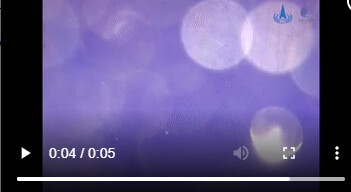 The short video clip on this website shows the camera footage (looking up) from Zhurong lander as it detached from its orbiter then falling into the Martian atmosphere. You can see the sky quickly turn from black to violet.

One can only imagine it then turned to deep navy before it became blue as it is the order of slowing spectroscopy as it goes from Ultraviolet (black) to purple to navy to blue to green to yellow to orange to red then to infrared (heat and again black: that's why it can be pitch dark and 70F inside a cave where above it on the surface, it can be bright and freezing 20 degree Fahrenheit).

The dangerous high vibration rate of light (gamma ray wavelength) from the sun slows down as it hits the outer atmosphere of a planet. As is in the case with here on Earth, that gamma ray strength is further reduced to X ray range (like the X-ray photo taken for your lungs and teeth, causes immediate cell damage and cancer). The light outside the plane at 35,000 feet contains light in the state with a wide range of wavelength including X rays, not just UV and visible. It is pretty cold up there because the light has not slowed down enough by hitting more densely strewn particles in lower altitude.

NASA always claimed that the Martian atmosphere is 1/20 of Earth's atmosphere.
Then, how can it have a reddish sky? A planet with such extremely thin atmosphere must show a person a purple sky when he looks straight up into the sky.

And, you have all heard of many news outlets talk about the "7 minutes of terror" which refers to the time it takes from the point of atmosphere entry to the parachute deploy.

For Earth, that duration of terror is 9 minutes as it was for the latest Dragon capsule by Space X.
7 minutes of terror at Mars when its atmosphere is supposedly only 1/20 of Earth's? Come On!!!

Also, this made me think about the story of the two green skinned kids found in medieval England, who later shed the skin color and became white. The air of the cavern world they were from must have had green hue to it kind of like the auroras. I dream of living somewhere where the light is not harmful. Out here on the outer-surface of this planet, we are constantly bombarded by UV ray strength of sunlight which causes constant cell damage at the DNA level, which eventually leads to the body just giving up and unable to repair itself anymore...death in 80 to 120 revolutions around the Sun.

Hmm, they're trying to say that this is from the UV, etc. anomalies from the orbiter's surveillance camera. Very interesting, thanks for sharing.