Are Fossils Linked to the Legendary Kraken Enough to Prove its Terrifying Existence ??

List members , here is an excellent article about the legendary sea creature , the Kraken of Norse mythology that lives in the ABYSS ! 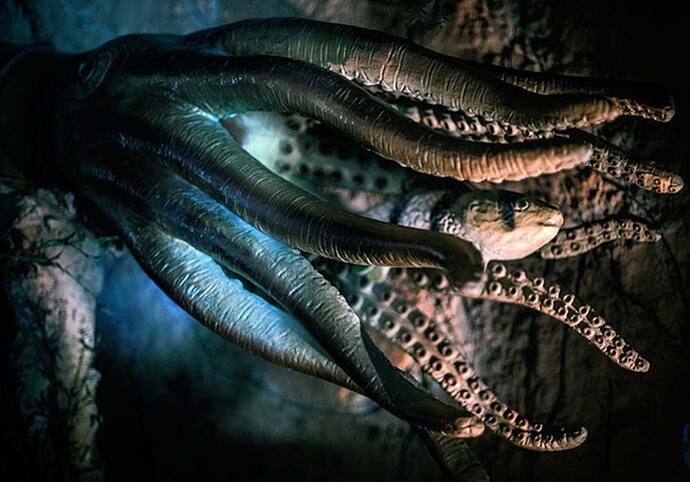 Are Fossils Linked to the Legendary Kraken Enough to Prove its Terrifying...

Scandinavian mythology claims the Kraken swallowed up whales and devoured ships. It has been described as a huge version of an octopus or squid. Legends have even claimed the terrifying sea creature measured one-mile long. Although the Kraken was... 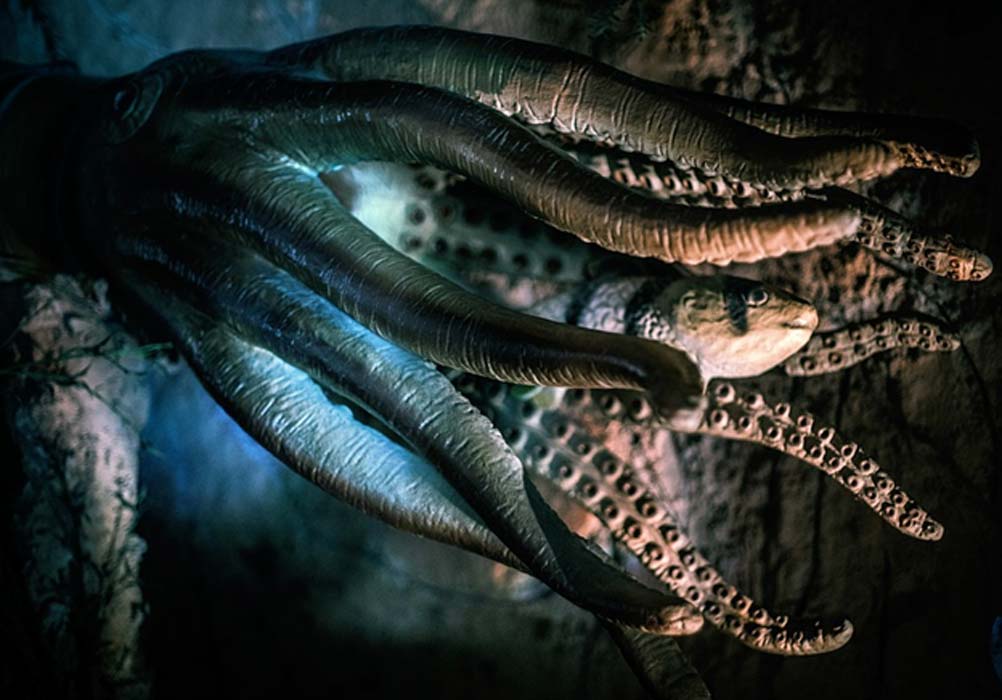 Are Fossils Linked to the Legendary Kraken Enough to Prove its Terrifying Existence?

Scandinavian mythology claims the Kraken swallowed up whales and devoured ships. It has been described as a huge version of an octopus or squid. Legends have even claimed the terrifying sea creature measured one-mile long. Although the Kraken was first noted in the 13th century Icelandic saga, Örvar-Oddr, a researcher believes he has fossil evidence that is linked to this creature.

Initially found in 2011, fossils of a marine lizard showed a strange pattern which a researcher believes was caused by a Kraken-like octopus. The claim has been criticized, but Professor McMenamin, a paleontologist at Mount Holyoke College in Massachusetts, backed up this conclusion with other findings. 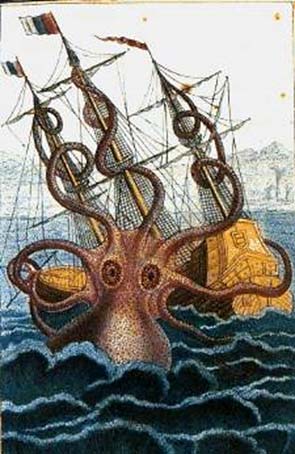 Pen and wash drawing by malacologist Pierre Dénys de Montfort, 1801, from the descriptions of French sailors reportedly attacked by such a creature off the coast of Angola. ( Public Domain ) Was it a Kraken?

An odd arrangement of sea reptile vertebrae was found in Berlin-Ichthyosaur State Park in Nevada. The animal was called an ichthyosaur and it lived around 200 to 250 million years ago. The manner in which the bones were found suggests that it was attacked by a much larger predator - perhaps supporting the hypothesis that a giant octopus or squid once dominated the seas. It has been estimated the creature which vanquished the ichthyosaur had to have been about 30 meters (98.43 ft.) long; this far surpasses the largest giant octopus known today – a creature rarely larger than a human being. 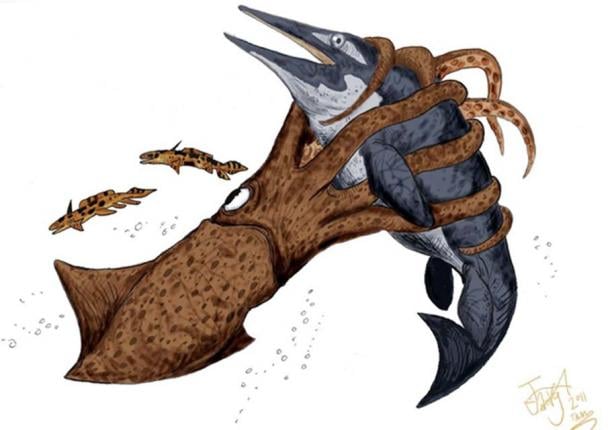 Artist’s depiction of a Kraken attacking an ichthyosaur. ( Hodari Nundu )

The discovery of a fossil identified as part of the beak of a giant octopus or squid-like creature, along with more bones arranged in unusual patterns which have sucker markings, adds to Professor McMenamin’s evidence. A 'debris pile' of scattered bones were also found alongside the remains of the ichthyosaur. 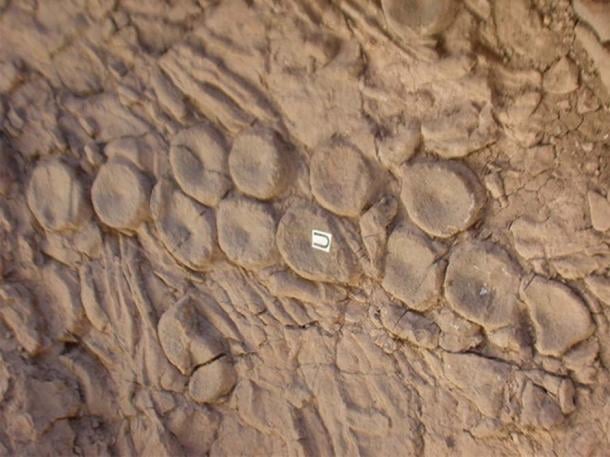 Professor McMenamin claims these ichthyosaur vertebrae were taken out by a sea monster and arranged in this pattern. ( Mark McMenamin )

Professor McMenamin asserts that the bones’ arrangement and the location of the sucker markings indicate the ichthyosaur was drowned or had its neck snapped. From there, it seems the beast was moved, possibly to the Kraken’s lair, where it was dumped.

Could this discovery really point to the existence of the legendary Kraken? While the idea is interesting, further evidence is necessary. 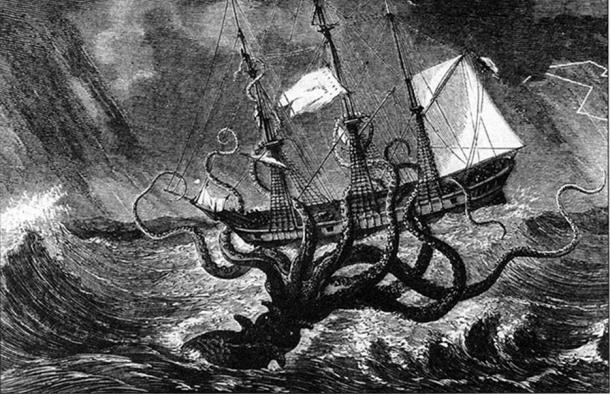 Top Image: An octopus and fish. Scandinavian mythology claimed the Kraken was a sea monster that looked like an octopus or a squid – but was much bigger. Source: CC0

Folks , the Kraken legend exists - by different names , across various cultures , so it is quite likely that the ancients were aware of such a creature that lived , specifically in the Northern ABYSS (the North Polar Opening ?) !

The Kraken is one of those Universal legends that refuses to go away...

List members , here is some more recent evidence , which is quite compelling :- 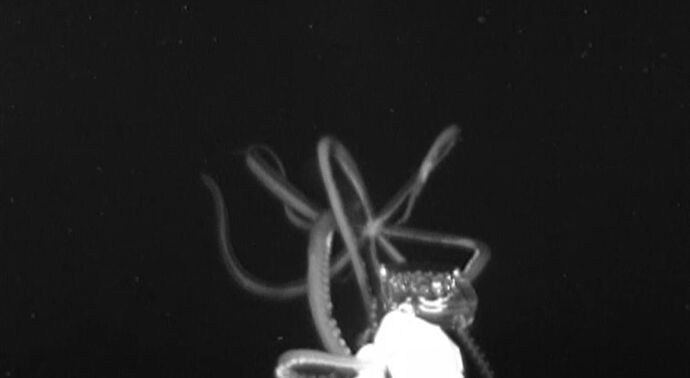 How scientists caught footage of 'the kraken' after centuries of searching

Tricking the giant squid's basketball-size eyes may have been the key.

How scientists caught footage of 'the kraken' after centuries of searching

Tricking the giant squid's basketball-size eyes may have been the key. 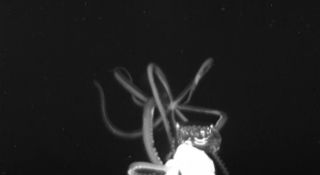 Eight long elegant legs unfurl as the squid inspects the e-jelly in the Gulf of Mexico. (Image credit: Screengrab of video courtesy of Edie Widder and Nathan Robinson)

The elusive giant squid has wriggled its way into folklore for thousands of years, inspiring tales of fearsome krakens with bodies as large as islands. In reality, A. dux is a tad smaller than that, capable of growing to about 46 feet (14 meters) long — about the length of a semi-trailer.

But despite their size, these cephalopods are almost never seen in the water; most observations of the behemoths come from dead or dying squids that wash up on shores or become ensnared in deep-sea trawling nets. That finally changed in 2012, when a team of marine scientists filmed a young A. dux in its natural habitat, about 2,000 feet (630 m) below the sea south of Japan.

Now, a study published online in the journal Deep Sea Research Part 1: Oceanographic Research Papers delves into why these giants of the deep are so elusive, and explains how a team of researchers was able to capture the first footage of A. dux in its natural habitat in 2012, and again in 2019 in the Gulf of Mexico.

According to the study authors (many of whom were present for the 2019 giant squid sighting), the creature's evasiveness is due, in part, to its enormous eyes.

Giant squids can live thousands of feet below the ocean's surface. Very little sunlight can penetrate this deep so to adapt, the giant squid evolved the largest eyes in the animal kingdom. Each of these cephalopods' peepers are about as large as a basketball — roughly three times the diameter of any other animal, Live Science previously reported.

These huge eyes not only help giant squids make their way around the deep, dark ocean, but probably also make them extra sensitive to the bright lights that marine researchers mount to their submersibles and underwater cameras, according to the study authors. That sensitivity could explain why giant squids are so hard to find in their natural habitats; by the time a research vehicle reaches a squid's swimming grounds, the squid has long since fled the craft's lights and vibrations.

To correct this over-illumination, the researchers involved in the 2012 and 2019 A. dux sightings turned down the lights on their submersible (named the Medusa). After reaching the desired depths, the Medusa turned off its lights and stopped moving, allowing creatures of the deep to come to it rather than actively navigating across the bottom of the sea. The team also illuminated its camera with a dim red light instead of the bright white lights typically used on expeditions like these, capitalizing on a natural deep-sea color-blindness.

"Many deep-sea species, including squid, have monochromatic visual systems that are adapted to blue [light] and blue bioluminescence rather than long wavelength red-light," the researchers wrote in the study. "Using red light may thus be a less obtrusive method for illuminating deep-sea species for videography."

The researchers also used the squids' attraction to blue light to their advantage, outfitting the Medusa with a custom lure that they called the E-Jelly. This small, spinning ring of neon blue lights sat on the end of an outstretched arm, mimicking the movement and glow of a bioluminescent jellyfish.

The lure worked, drawing A. dux out of the darkness in both 2012 and 2019. In fact, the giant squid spotted in the Gulf of Mexico was a little too convinced by the E-Jelly's display; as footage of the encounter shows, the giant squid tried to attack the Medusa's camera arm with its tentacles in the hope of taking home a nice jellyfish meal. (This assault enabled the team to measure the squid's tentacles, which appeared nearly 6 feet, or 1.8 m, long).

This strategy of combining low-light equipment with bioluminescent bait seems to be the most effective known method of tricking the giant squid out of hiding, the researchers concluded. That's a handy trick, as there is much to learn about the kraken's behavior that can only come to light in the darkness of its natural habitat.