1719: "The Sacred Theory of the Earth" – Earth as "an egg in form with a yolk of fire an an abyss between crusts"

Thomas Burnet published an interesting book entitled "The Sacred Theory of the Earth" in 1719 (available at Archive.org and other various copies). I found pages 86 to 87 to be particular interesting while glancing through it with this sketch particularly catching my eye: 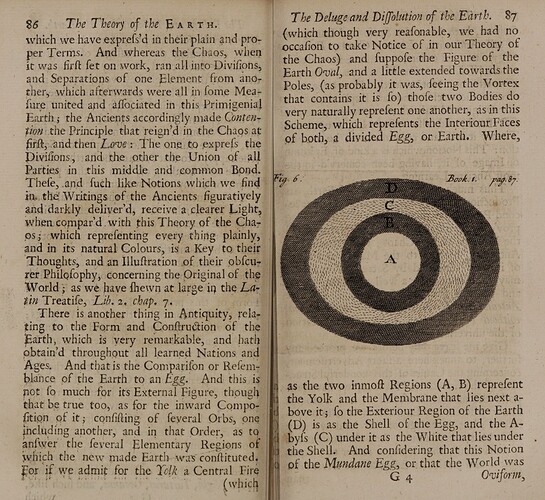 Notice this excerpt of text:

There is another thing in Antiquity, relating to the Form and Constructions of the Earth, which is very remarkable, and hath obtain'd throughout all learned Nations and Ages. And that is the Comparison or Resemblance of the Earth to an Egg. And this is not so much for its External Figure, though that be true too, as for the inward composition of it; consisting of several Orbs, one including another, and in that Order, as to answer the several Elementary Regions of which the new made Earth was constituted. For if we admit for the Yolk a Central Fire (which though very reasonable, we had no occasion to take Notice of in our Theory of the Chaos) and suppose the Figure of the Earth Oval, and a little extended towards the Poles, (as probably it was, seeing the Vortex that contains it is so) those two Bodies do very naturally represent one another, as in this Scheme, which represents the Interiour Faces of both, a divided Egg, or Earth. Where, as the two inmost Regions (A, B) represent the Yolk and the Membrane that lies next above it; so the Exteriour Region of the Earth (D) is as the Shell of the Egg, and the Abyss (C) under it as the White that lies under the Shell. And considering that this notion of the Mundane Egg, or that of the world was Oviform, hath been the Sense and Language of all Antiquity, Latins, Greeks, Persians, Aegyptians, and others, as we have shew'd elsewhere, [Tell. Theor. Sac. lib. 2. c. 10.] ... 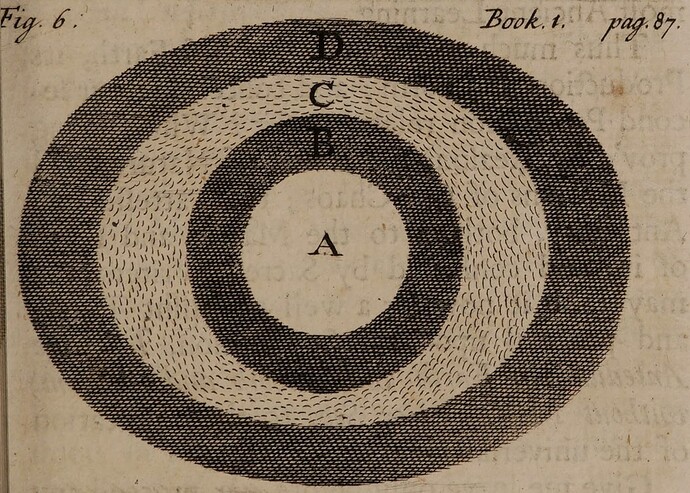 @Soretna , this is a very fascinating concept indeed...seeing this author's work for the first time !

Folks , I also see a similarity between this "planetary egg" concept and the ideas of cellular Cosmogony...hmm !

@Soretna , this mainstream science article lets the proverbial cat out of the bag ! Their casual approach is highlighted by the word "almost spherical" :)) There is nothing like "almost" in science - it either is , or is NOT ! One can't be wishy washy in science...

This particular "intelligent approximation" of a "minor detail" (proving the flaws of oversimplification) was very costly for our civilisation and even mislead the likes of Newton and Einstein - it basically sidetracked science about 150 years ago...else , all textbooks today would be saying that stars and planets are actually egg shaped/oval/TOROIDAL and mankind would be travelling in UFO like spacecraft to exoplanets in other Solar systems ! 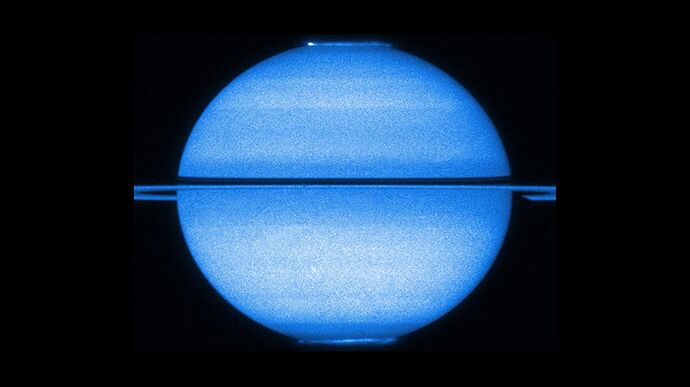 Why Are Planets Almost Spherical?

Why do planets in the solar system all seem to be round? Why not cylindrical? Or even cube-shaped?

Why Are Planets Almost Spherical? 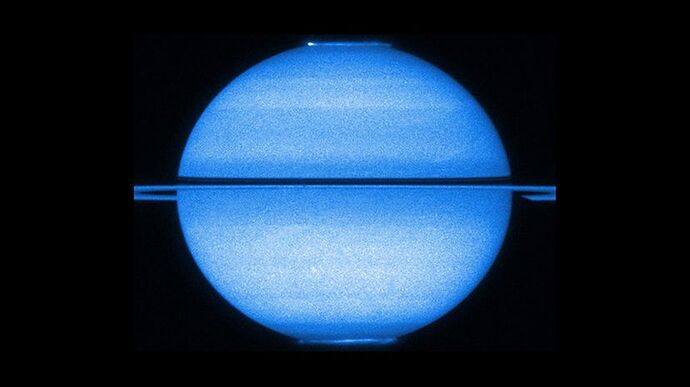 In this photo of Saturn, snapped by Hubble, you can see the bulge in the ringed planet's middle. NASA/ESA/STSCI/UNIVERSITY OF LEICESTER

It's something we kind of take for granted. Roses are red, and planets are spherical. That's just the way things are, right? After all, building model solar systems would be way more challenging if, instead of using little foam balls, we had to make a bunch of icosahedron-shaped planet models.

But have you ever wondered why the planets look like this? Why are they basically spherical and not, say, cylindrical or cube-shaped?

We should kick off this discussion by calling a spade a spade. None of the planets in our solar system are perfect spheres, nor for that matter is our sun. All those bodies could more accurately be described as "oblate spheroids." Objects with this shape bulge slightly around the middle. To borrow an analogy from the astronomer Phil Plait, they look like a basketball that someone is sitting on.

Put more technically, in a celestial body with an oblate spheroid shape, the polar circumference will be smaller than the equatorial one. So here on Earth, if you were to travel from the North Pole to the South Pole and back, you'd have walked a grand total of 24,812 miles (39,931 kilometers). On the other hand, a complete trip around the equator would be a bit longer. That's because the circumference of Earth's equator is 24,900 miles (40,070 kilometers). As such, when you stand at sea level on the equator, you're farther away from the center of our planet than you would be at either pole.

The oblate spheroid shape is the result of two main factors: gravity and rotation. Troy Carpenter, director of Washington State's Goldendale Observatory, recently discussed the matter with us in an email exchange. "Everything which has mass experiences gravity, and gravity attempts to crush an object inward in all directions," Carpenter explains.

That's because all objects experience self-gravity, a force which pulls their atoms toward a common center. As the mass of an object increases, so too does its self-gravitational pull. After it exceeds a certain mass, the pull gets overpowering to the point where the object collapses onto itself and becomes spherical. Little items — like, say, a banana or a lug wrench — can resist this fate because their self-gravity is relatively weak, allowing them to retain non-spheroid shapes. However, in planets, suns and other truly massive bodies, the force is so strong that they can't avoid being distorted into spheroids.

"But gravity is not the whole story," says Carpenter. While gravity conspires to render the planets spherical, the speed of their rotations is simultaneously trying to flatten them. The faster a celestial body spins, the more disproportionate its equatorial bulge gets. "This is why there are no perfect spheres in our solar system ... only oblate spheroids," Carpenter tells us. "The sun is almost a perfect sphere, due to its immense gravity and relatively slow rotation rate of 25 days. A significant percentage of stars in the sky rotate much faster and bulge noticeably at their equators." 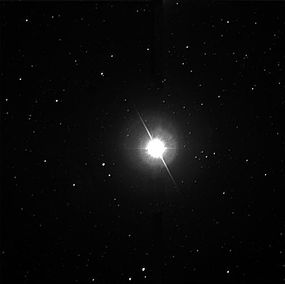 Stars, like Altair pictured here, are subject to midriff bulges, too.

One such star is Altair. Located just 16.8 light-years away from our home planet, it's among the brightest objects in the night sky. Altair is also notable for spinning very, very rapidly and completes a full rotation on its axis every 10.4 earth hours. Accordingly, astronomers estimate that Altair is at least 14 percent wider at the equator than it is from pole to pole. Rotational speed also explains Jupiter's bulge. After all, a day on this gas giant is a brisk 9.9 earth hours long.

Other forces act upon the stars and planets as well, altering their shapes. Although Earth is an oblate spheroid, it certainly isn't a perfect one. The gravitational pull of the sun and moon both influence the planet's shape to a degree. For that matter, so do Earth's own plate tectonics. Consequently, the mass of our home world isn't evenly distributed — in fact, it's rather lumpy.

Still, it looks a good deal rounder than Jupiter (and Saturn). In turn, the planets in our universe appear way more spherical than some of their moons do. Mars, for instance, has two small satellites, neither of which has the self-gravity to be pulled into an oblate spheroid. Instead, their appearance is often described as potato-shaped.

In conclusion, we'll say this much for our home planet: It may not be flawless, but at least the place is fairly well-rounded.